Available for early access: The International Council on Active Aging is releasing the draft manuscript of a special online feature to the Journal on Active Aging due to its timely content. Written by Dr. S. Jay Olshansky and colleagues, this research article examines the healthspans and lifespans of the two 2020 United States presidential candidates. The article is in progress. Changes can be expected in a final version, which will be published at a later date.

Below, Dr. Olshansky and colleagues share some context for their article—why they undertook this research and what they hope it will achieve.

One of the eligibility requirements to become president of the United States involves an issue that has been studied by scientists for centuries—chronological age. While a clearly demarcated lower age limit of 35 was set to ensure that candidates would be experienced enough to handle the position and have a sufficient public record to be evaluated, there is no upper age limit. The issue of age and ageism has once again surfaced during the 2020 election cycle. This manuscript, written by scientists with experience in dealing with aging and ageism issues among presidents and presidential candidates, and physicians knowledgeable about aging, is designed to address the issue head on.

Questions about the rising age of US presidents and presidential candidates have always been present, but perhaps the most famous discussion on this topic appeared during a debate in 1984 between Ronald Reagan and Walter Mondale. During this televised debate, Reagan was asked whether he was up for the challenge of the presidency given his advanced age. His response was as follows: “I will not make age an issue of this campaign. I am not going to exploit, for political purposes, my opponent’s youth and inexperience.” Reagan smirked, Mondale broke out into a broad smile, the audience laughed, and the issue of age was completely diffused for that election.

In this election cycle, the issue of age has once again surfaced. We are witnessing the weaponization of age in a way that is a classic example of ageism [defined as a prejudice or form of discrimination based exclusively on an individual’s chronological age]. The late Dr. Robert Butler, who was a mentor to most of the authors of this paper and the founding director of the National Institute on Aging, coined the term “ageism” in 1969. Butler would no doubt have found the weaponization of age in a presidential election most disturbing.

As scientists in the field of aging with experience in studying the relevance of age at the population level, and as physicians with experience in studying the attributes of people who survive healthfully into their septuagenarian and later years, we feel it is our responsibility to set the record straight on whether chronological age should be relevant in this or any other election.

It would have been easy for us to draw on decades of research demonstrating that the number of healthy older individuals is rising rapidly and expected to increase in the coming decades, and that many older individuals are perfectly capable of doing almost anything—including being president of the United States. We decided instead to present a far more convincing argument by generating a personalized assessment of lifespan and healthspan for both candidates based on their publicly available medical records and demographic attributes involving what are known as the social determinants of health. We have no interest in advocating for either candidate, and we took measures to ensure that our assessments were free from bias. Our goal is to provide readers with what science and medicine inform us about the relevance of chronological age among the two candidates now running for president.

Should the number of trips around the sun be a litmus test for the office of president of the United States? Our answer appears in the following page.

Click here to download the draft article: “Projected lifespan and healthspan of Joe Biden and Donald Trump before the 2020 election” 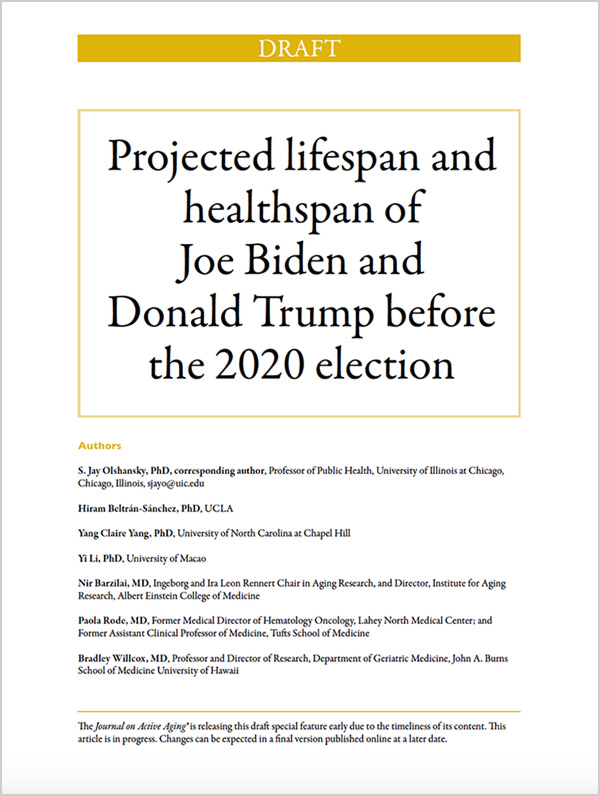 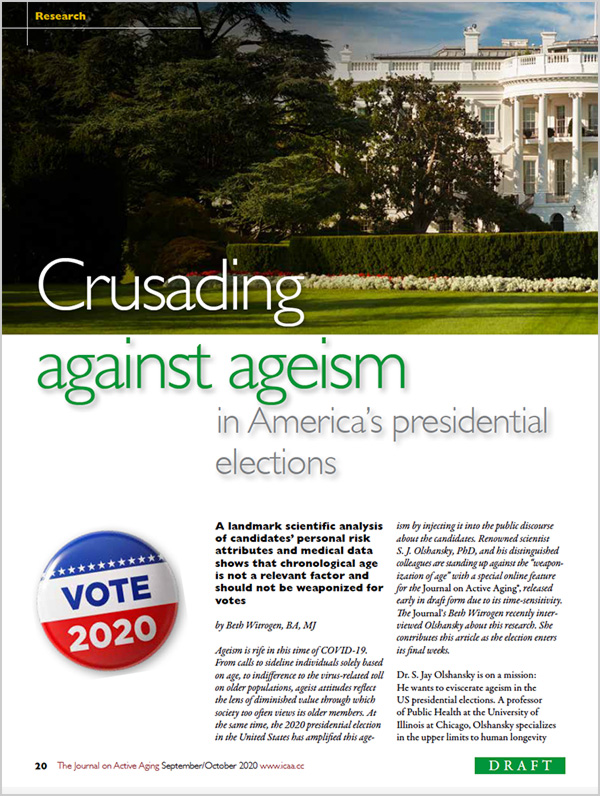