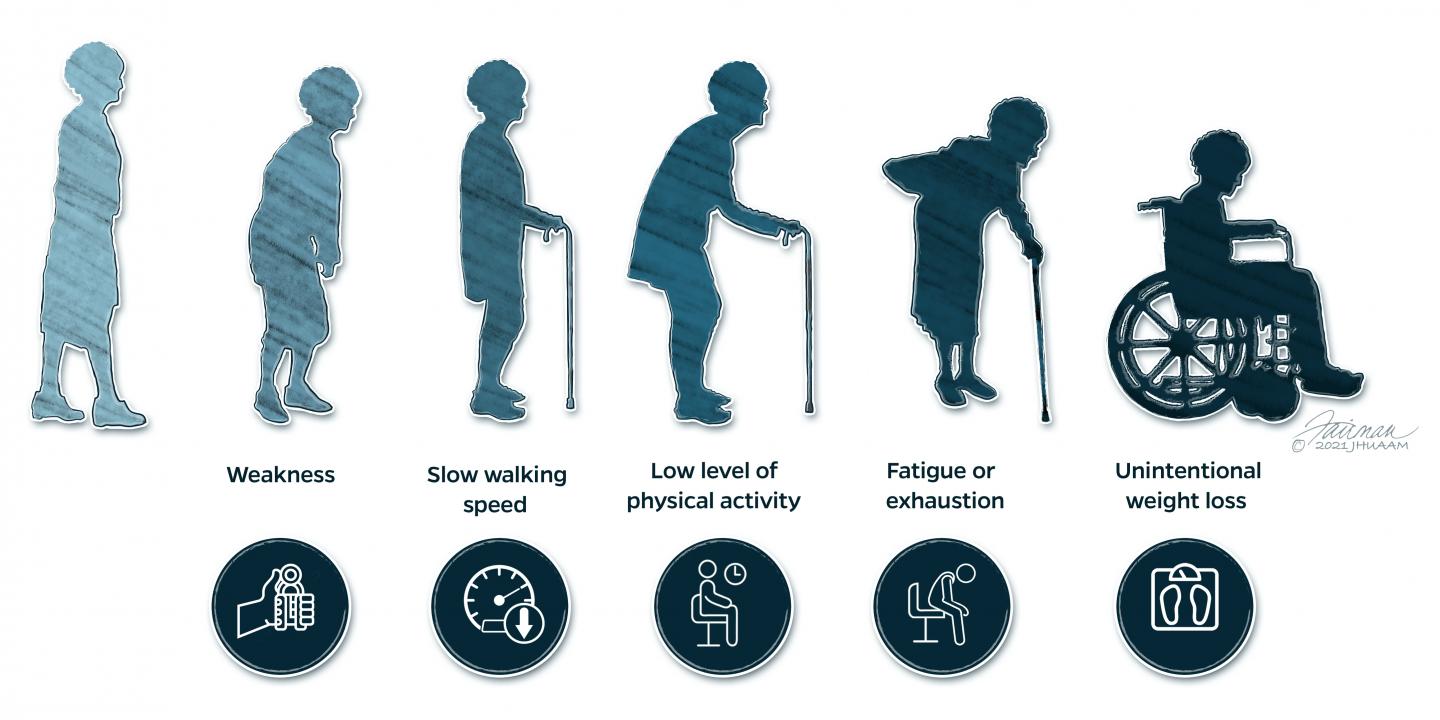 IMAGE: DIAGNOSIS OF FRAILTY IS BASED ON THREE OR MORE OF FIVE KEY CLINICAL SIGNS AND SYMPTOMS: WEAKNESS, SLOW WALKING SPEED, LOW LEVEL OF PHYSICAL ACTIVITY, FATIGUE OR EXHAUSTION, AND UNINTENTIONAL... view more

Physicians understand frailty as a dysregulation among multiple systems in the body that make it less resilient and unable to recover completely when faced with a physical challenge such as injury or illness. "Defining frailty on a scientific level, however, has been a challenging task," explains Ravi Varadhan, Ph.D., associate professor of oncology in the Division of Biostatistics and Bioinformatics at the Johns Hopkins Kimmel Cancer Center.

The researchers developed a system for diagnosing frailness, which is characterized by three or more of five key clinical signs and symptoms: weakness, slow walking speed, low level of physical activity, fatigue or exhaustion, and unintentional weight loss.

They say that frailty is a distinct state that occurs when key physiological and biological systems -- including the metabolism, musculoskeletal and stress-response systems -- become out of sync with one another, interacting in an unbalanced way when faced with challenges. Eventually, Varadhan says, disharmony among these systems pushes the body across a threshold into a state of highly diminished function and resilience.

In the perspective article, Varadhan and colleagues point to Johns Hopkins' 2012 Women's Health and Aging Study II research initiative as evidence. In this study, volunteers from 85 to 94 years old received a standard oral glucose tolerance test, in which their blood glucose and blood insulin levels were measured after they consumed a high-sugar drink. Those with diagnosed frailty had exaggerated responses, on average, to both measures and were far slower to return to blood sugar baseline than those who weren't frail -- a sign of a failing metabolic system.

Similarly, frail women participating in the same study had molecular markers of slower muscle recovery after exercise, which is an indicator of a weakened musculoskeletal system. Also, following a simulation test, these women produced less cortisol, a hormone that indicates the body's response to stress and is a sign of a dysregulated stress response.

The metabolism, musculoskeletal and stress-response systems provide feedback to one another, so a challenge to any of these systems could lead to a domino effect in the others, raising the risk for a wide range of health problems associated with aging, such as diabetes, cardiovascular disease and cancer, Varadhan says.

Interventions that target multiple systems at once, such as physical exercise -- rather than those that have an effect on just a single system, such as a drug that lowers blood sugar--could potentially prevent, slow or reverse frailty, the researchers report.

Varadhan and his colleagues continue to study exercise and other interventions to develop the best ways to stave off and treat this common consequence of aging.

"The more we learn about frailty," he says, "the more we can help people live better lives as they age."

"We hope the dynamical systems lens through which we considered physiological fitness in our study may lend fundamental insights into the nature and maintenance of health, and not only its loss in states of frailty and diminished resilience," says Karen Bandeen-Roche, Ph.D., Hurley-Dorrier Professor and chair of biostatistics at the Johns Hopkins Bloomberg School of Public Health, and co-senior author of the article.