A call for change

Founded in 2001, ICAA began promoting the vision of active aging a year before the release of the Madrid International Plan of Action on Ageing, 2002, that called for changes in attitudes, policies and practices so that people aged with dignity and security and were empowered to participate fully in society. Since then, ICAA has developed a leadership position in uniting a diverse number of organizations and individuals under the banner of active aging.

This is a watershed moment for the active-aging community. At the White House Conference on Aging 2015, “healthy aging” emerged as a theme. While much of the discussion centered on medical care, this theme also included acknowledgement of the roles of physical activity, nutrition, and cognitive health play. Input from the public emphasized the need to “ignite a culture change” in attitudes to recognize older adults as positive contributors in their communities and to support age-friendly communities. The call for a change in attitudes was echoed by World Health Organization when it released the “World Report on Ageing and Health” and later announced the “Decade of Healthy Aging” beginning in 2020.

What does this mean to you?

Profound change is in the air. Now is the time to make your move to fully embrace the concepts of active aging for yourself, and spread the message to your colleagues, friends and family. The older population is full of potential, and we all must do everything we can to take advantage of this opportunity.

For me, the Decade of Healthy Aging means there is a new model, one to grasp, where the definition of healthy aging is based in each individual’s functional ability—to live fully, with more ability than disability. Expectations of longer lives are changing. We need to lead that charge.

By joining with the global community of active aging, we make ourselves stronger. Will you join us? 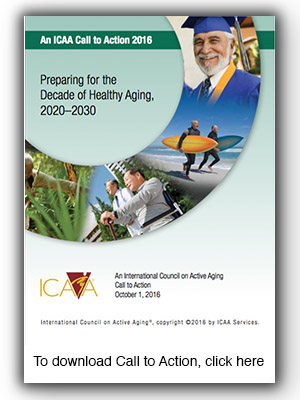 The aging of the populations of most countries around the world is having a profound impact on the attitudes toward longer lives. Individuals expect to be active and involved long past the traditional retirement age of 65 years old. Policy makers and economists are beginning to make recommendations based on life stages rather than a specific age. Spurred by the demographic trends, governments and private organizations are rethinking their responses to the older population. A key aspect of the debates about aging populations is the realization the older adults are not necessarily a burden on society, but rather contributors to economies and social needs.

The philosophy of active aging is explained by the World Health Organization as the “process of optimizing opportunities for health, participation and security in order to enhance quality of life as people age.”1 In the Final Report from the White House Conference on Aging 2015, “healthy aging” was explained as living a long, productive, meaningful life and enjoying a high quality of life.2

To implement these ideas, the International Council on Active Aging (ICAA) promotes the vision of all individuals—regardless of age, socioeconomic status or health—fully engaging in life within seven dimensions of wellness: emotional, environmental, intellectual/cognitive, physical, professional/vocational, social and spiritual.

As the world moves through the 21st Century, multiple trends are influencing the lives of older adults.

Life spans are lengthening. Globally, life expectancy at birth is projected to rise from an average 70 years in 2010–2015 to 77 years in 2045–2050.2 As life spans increase, so does the potential for adding more years of health and fewer years of disability (compression of morbidity). Health-related quality of life encompasses prevention of, or management of, chronic health conditions as well as maintaining functional ability, social support and economic stability.5 As people age, adding more years of health is a personal as well as economic imperative.

As people age, the risk of developing a chronic health condition increases. Health conditions such as cardiovascular diseases, diabetes, arthritis and cancers are more often found in older populations. Some of these conditions are referred to as “lifestyle diseases” because they are related to physical inactivity, poor diet choices, emotional stresses and lack of cognitive activity. They are also related to lack of access to medical care. Chronic health conditions are among the most common and preventable health problems, according to the US Centers for Disease Control and Prevention.6

Functional impairments can limit older adults’ ability to engage in daily life. In the United States alone, almost one-quarter (22%) of all 65+ adults reported having at least one limitation in vision, hearing, mobility, communication, cognition and self-care (2014). At age 85 or older, 42% reported having a functional limitation.7 Functional ability is a core component of the definition of healthy aging outlined in the World Health Organization’s “World report on ageing and health” and a goal that emerged from the White House Conference on Aging.

Stereotypes and negative attitudes (“ageism”) inaccurately shape society’s perceptions of aging. Stereotypes assume that as people age they become frail, confused and unable to participate in a rapidly changing and technology-driven world. There is an assumption that older adults are a “burden” on society. Ageist attitudes do not account for the millions of individuals with distinct personalities and abilities who do contribute to the larger society. In 2016, the theme of the International Day of Older Persons is “Take a stand against ageism” to bring attention to the need to counteract stereotypes.

Older adults who hold negative beliefs about aging have poorer health and functional ability. Individuals who believe that older people are more ill or have memory loss, tend to perform more poorly on cognitive and physical assessments compared to older people who do not hold those beliefs.8,9 Conversely, studies have reported that when people’s attitudes toward aging improved, their functional or mental health also improved.10,11

Older adults provide great value to their families, society and the economy. Policy restrictions based on age alone, such as mandatory retirement ages, have limited older adults’ ability to work, which results in economic consequences for individuals as well as for society at large. On the other hand, people 65 years and older compose a large percentage of the unpaid workforce as caregivers and volunteers, contributing billions of equivalent dollars to local economies. To continue these contributions, older adults must have the functional abilities and health to do so.

The quality of life of older adults improves when they actively engage in the dimensions of wellness. There is a large body of evidence demonstrating that people who engage in physical activity, maintain social connections, are cognitively active, and acquire or use their skills report being more able in physical and cognitive function, and being more satisfied with life.12,13,14,15,16

Given these trends, the World Health Organization adopted a “Global strategy and action plan on ageing and health.”17 The strategies are built on defining “healthy aging” as enhancing the functional abilities that enable well-being in older age.18 The global strategy features two goals:

1. From 2016–2020, take evidence-based action to maximize functional ability that reaches every person.

2. By 2020, establish evidence and partnerships necessary to support a Decade of Healthy Ageing from 2020 to 2030.

Since 2001, the International Council on Active Aging has joined with organizations and individuals around the world to promote active aging and the dimensions of wellness framework. ICAA issues a call to action for its members and all professionals working with older adults to take action to implement the goals of the global strategy.

The active-aging philosophy and professions are at an inflection point around the world. It is time for a new model of aging, one that expands the understanding of “health” to emphasize functional abilities. When asked, most older adults consistently emphasize that they want to stay independent and be of use to their families and communities. Their functional abilities are key to achieving these goals. You, the professionals in active aging, have the tools to provide the environments and services that develop functional ability—in each dimension of wellness.

Take action to redouble your efforts to fight against ageist stereotypes and maximize the functional ability of each person you meet. Join with your colleagues and the international community to launch 2020 as the Decade of Healthy Aging.

• Commit to today’s older population and future population by creating an environment that promotes well-being and health along the life span.

• Educate the public, older adults and colleagues about the potential of the aging population and the philosophy of active aging. Be an advocate, and translate the information so that when colleagues and clients hear about the Decade of Healthy Aging, they understand what it means to them.

• Implement interdisciplinary partnerships aimed at enhancing the functional abilities of older adults. Team with professionals in medicine, fitness, therapy, recreation and life engagement to coordinate efforts and send consistent messages on the approaches to maintaining abilities.

• Educate older adults on the relationship of their lifestyle choices—including healthy eating, meaningful pursuits, physical activity, and social and spiritual activities—to their functional abilities and feelings of well-being. Then devise programs and campaigns with specific, measurable outcomes to put education into action.

• Expand the physical dimension of wellness to include the importance of evidence-based nutrition, along with healthcare and physical activity, for preventing or managing chronic conditions and fueling day-to-day functional ability.

• Emphasize the active participation of older adults, to the best of their abilities, in formal and informal opportunities within the dimensions of wellness. Work to shift attitudes of care staff and families to embrace the reality that older adults are capable of doing many things, and a better role is helping them do so. The more sedentary a person is and the more useless an individual feels, the more likely that person is to become frail and depressed.

• Develop environments in urban and rural locations, buildings and open spaces that are accessible and desirable to older adults. Join the age-friendly communities movement to advocate for better infrastructure, and encourage older adults to do so.

• Provide opportunities for older adults to serve as active-aging role models and educators, framing their role in changing negative perceptions of aging. A tactic is to encourage older adults and colleagues to identify role models of aging through ICAA’s Changing the Way We Age® campaign.

• Make extra effort to bring the active-aging philosophy and programming to people in long-term care. Integrate older adults at all stages along the continuums of cognitive and physical function.

• Partner with researchers and professors at universities and research centers to encourage studies on the results of programs that enhance the functional abilities of older adults.

• Advise product manufacturers and service providers on how they can design, develop and deliver products and services that are inclusive for all ages and abilities.

Active-aging professionals and organizations are well positioned to implement the global strategies. They are experienced in delivering evidence-informed and evidence-based opportunities to help older adults maximize their functional abilities and feel a sense of well-being throughout their lives.

In the wake of the outcomes of both the World Health Organization report and strategies, and the key focus areas of the White House Conference on Aging, it is time to join the global community to embrace active aging across the life span.

14. National Endowment for the Arts. (2013). The Arts and Aging: Building the Science. Summary of a National Academies Workshop, Research Gaps and Opportunities for Exploring the Relationship of the Arts to Health and Well-Being in Older Adults. [prepared by Mary Kent and Rose Maria Li]. Available at https://www.arts.gov/publications/arts-and-aging-building-science