"As the global population grows and ages, so does their need for eye care. But according to two new studies published in The Lancet Global Health, these needs aren't being met relative to international targets to reduce avoidable vision loss." 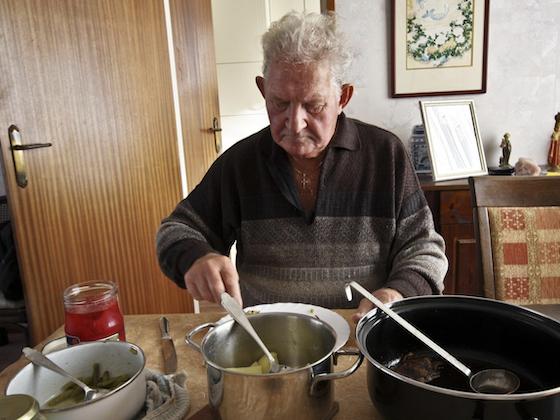 "The assumption that an elderly widower can hardly boil an egg simply doesn't stand according to a recent University of Copenhagen study. The study reports that male seniors do cook and only blossom in the kitchen once alone."

"A new global study finds older people in wealthy countries consume more alcohol than their counterparts in middle-income countries, on average, although a higher cost of alcohol is associated with less frequent drinking. Across counties, people drink less as they get older, but at different rates and starting points. The study was led by researchers at Columbia University Mailman School of Public Health and the Robert N. Butler Columbia Aging Center. Findings are published in the journal Addiction."

"After Jo-Ana Chase heard her mother had successful heart surgery, she was relieved when her mom was finally discharged from the hospital and sent home to be cared for by her brother."

"Obese women have an increased risk of hip fracture earlier than others, already well before the age of 70, a new study from the University of Eastern Finland shows. "

"While many people are now enjoying longer, healthier lives, current retirement ages are posing challenges for both policymakers and retirees. A new study looked into whether there is potential to increase the retirement age based on the relationship between working life expectancy and health aspects important for work ability for women and men in Europe."

"CABHI, powered by Baycrest announced its partnership with the newly amalgamated organization that brings together the Canadian Foundation for Healthcare Improvement (CFHI) and Canadian Patient Safety Institute (CPSI), CIHR and health ecosystem partners across Canada to fund Implementation Science Teams in support of long-term care (LTC). "

Aging well in Quebec: A portrait of the inequalities between generations and between seniors

"Today, the Observatoire québécois des inégalités is releasing its report Aging well in Quebec, a first major portrait on the aging population in Quebec and its issues. This report was made to guide experts and decision-makers in the development of new social practices to reduce inequalities among seniors."

"AceAge Inc. (AceAge), a Canadian healthcare technology company with its innovative medication dispenser, Karie, announced that it has closed a CA $5 million Series A financing round led by Longliv Ventures, a member of the CK Hutchison Holdings Group (CKHH), with the participation of a fund managed by the Bloom Burton Investment Group (Bloom Burton). Dr Dan Eldar, Managing Director at Longliv Ventures, will join the AceAge Board of Directors. Longliv Ventures Fund, a member of CKHH, focuses on consumer-oriented digital health solutions. CKHH, via its retail division AS Watson, operates the world's largest international health and beauty retailer, with over 15,800 stores in 27 markets worldwide."

"Women being treated for cancer often experience menopause quite suddenly with common symptoms, such as hot flashes, amplified more than had menopause occurred naturally. "

"Elders are more respected in Japan and China and not so much in more individualistic nations like the United States and Germany, say Michigan State University researchers who conclude in a pair of studies that age bias varies among countries and even states."

"Higher than normal blood pressure is linked to more extensive brain damage in the elderly, according to a new study published today (Thursday) in the European Heart Journal [1]."

Most adults over 50 say they'll get vaccinated against COVID-19, but many want to wait

"Once enough people receive effective vaccines against the novel coronavirus, experts say, the end of the pandemic may be in sight. But a new poll of older adults - one of the highest-priority groups for vaccination - suggests an uphill climb lies ahead to reach that goal."

"A new study led by researchers at the Johns Hopkins Bloomberg School of Public Health and the Federal Reserve Board of Governors found that Medicare beneficiaries who go on to be diagnosed with dementia are more likely to miss payments on bills as early as six years before a clinical diagnosis."